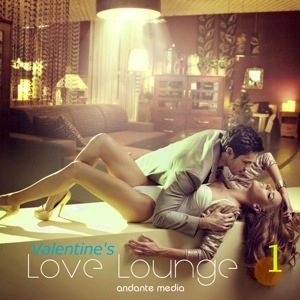 (andante media, Berg, Germany, February 11th, 2014) andante media has today released its first compilations “Valentine’s – Love Lounge, Vol.1 and Vol.2” from two exciting band and music projects named ‘eSonic’ and ‘ABANDO’! These two dance albums, in lounge and chillout-style, provide the right mood for a sophisticated Valentine’s evening and the perfect backdrop for an enjoyable Valentine’s dinner. Both releases are now available in more than 100 download shops including iTunes, Amazon, Google-Play, AOL and many other online stores in over 240 countries worldwide.

The music and audiobook publisher andante media has today released its first two compilations from two special music projects. After releasing the EPs “Latin Passion – Promise” by ABANDO and “Vocal Lounge – Prolog” by eSonic at the end of January and on the 1st of February, andante media has now released these two new long play CDs just in time for Valentine’s Day. Each compilation is a sensual mix of cool tracks and the best soulful songs from the album releases “Manhattan Lounge – Tunes of the City” and “Latin Passion – Latin Relax Lounge” by ABANDO, and from the other upcoming album “Vocal Lounge – Episode One” by eSonic. What is really exciting is that both compilations include titles from albums that will not be released before the end of February. So the audience will get to hear these tracks before the official original albums are launched! Diana Ziegler, the owner and publishing director of andante media, says: “These two compilations are the perfect music for the cozy hours of Valentine’s Day – many thanks to all the musicians, singers, songwriters and audio engineers that worked on these projects.” And speaking about the music projects eSonic and ABANDO she says: “I have worked for so many years with this great network of musicians and we have realized so many creative music productions together outside the regular consumer music market, and now I´m really proud that we decided to release these works for a big audience worldwide under the andante media label. These albums are really cool and worth recommending – just listen!”

ABANDO is a music project with a lot of experienced musicians behind it. Some of them are successful studio musicians and some of them are members of different bands. Due to their special partnership with andante media the decision was made, to release all past and future artistic output under the name ‘ABANDO’, ensuring there is no crossover with their current band projects and other album releases.

eSonic brings together a number of really established singers, songwriters, producers and members of well-known bands with sought-after studio musicians. Similarly to the ABANDO project, the musicians involved have chosen to release their works under the pseudonym ‘eSonic’ to make sure that these individual projects do not affect other current projects of any artist or band.

andante media is an established music and audiobook publisher located in Berg on Lake Starnberg just outside of Munich. Founded by Diana Ziegler in 1995, “andante media HÖRARCHIV” is one of the largest independent rights owners within the German-speaking area.

Its main lines of business are licensing and the production of customized audio CDs for advertising campaigns. From add-on promotions and retail editions to individually commissioned works and charity projects, the company’s service portfolio is enormous.

Since signing a digital distribution deal with service provider Believe Digital in 2013, andante media is carrying out its plans to provide the world’s music lovers and collectors with access to the „andante media HÖRARCHIV“ music archive via digital releases. One really smart way of doing this is already established in its first iOS-App “ClassiCal-Musiccalendar”, which gives innovative access to andante media´s huge archive of classical music. Another way of making the archive of its band projects available to the public is by issuing releases from acts and collectives of artists like ABANDO, eSonic and BeatPulpit, as well as other pseudonyms composed of great musicians, singers, songwriters and producers.